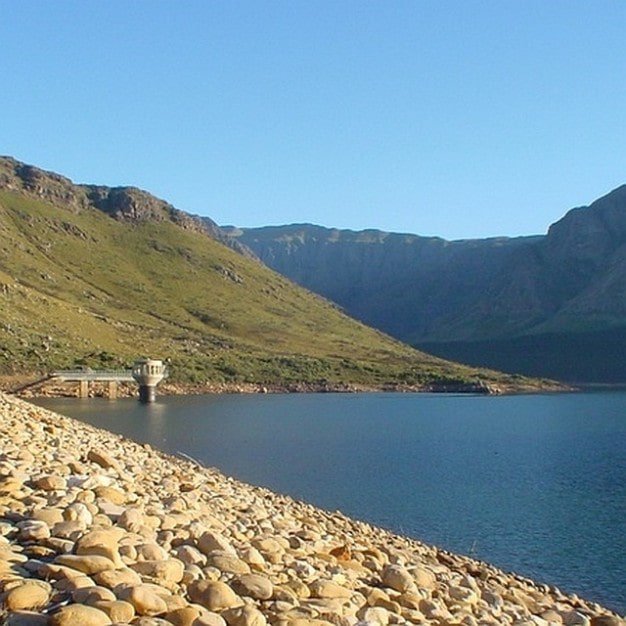 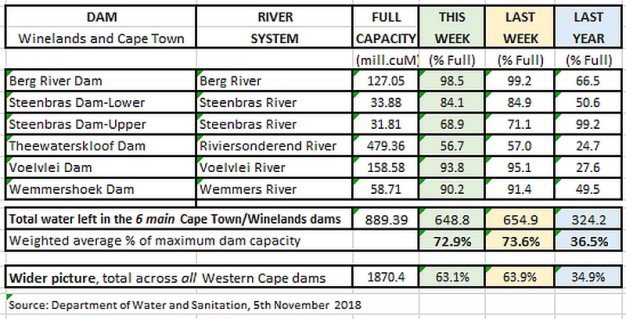 A week ago the Metro was still drawing heavily from the Steenbras dams but that that has reportedly changed and water is currently also being drawn from Voelvlei Dam. The Berg River and Theewaterskloof dams should now start to reflect the effect of outflows to agriculture.

The following chart shows the weekly change in the total amount of water stored. Note that I have changed the colour coding in order to make it easier to follow present changes [2017/18 is now shown in green and current 2018/9 is now shown in red, emerging left]. 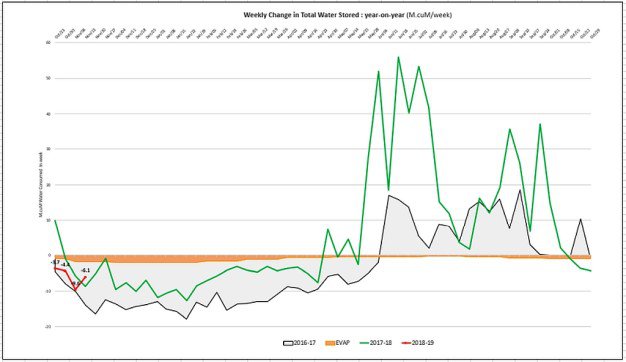 [click on the graph to see an enlarged version]

I expect that the red line will tend to follow the general shape of the green and black lines for the coming three months, probably lying somewhat between the two and more towards the black line (which denotes 2016) due to the latest easing of restrictions. In both instances supplies of water to the irrigation boards had commenced by this stage. It is likely that around end of January 2019 that they will diverge more sharply as distribution of water to agriculture continues in 2019, whereas it was cut off during February 2017, as the green graph clearly shows.

It is expected that agreement on water allocations will be reached and announced by DWS this coming week.  There will be no gazetting needed as an emergency condition no longer applies.

Once DWS has set water allocations for the irrigation boards and municipalities, the latter will then decide and announce appropriate levels of restriction to be applied to their communities in order to conform with the allocations, and publish the changed tariffs.

The weather is quickly taking on the normal summer pattern with the dominant high pressure zone statically positioned over the Cape. No significant rain is forecast until next week when light rain will brush the southernmost Cape, perhaps bringing small inflows to the Steenbras dams. Beyond that there is some promise of thundery weather around 5th/6th December that may see 20-30mm of rain falling if one finds oneself under the storm.

El Nino is continuing to move into place but is not fully there yet – it needs two more months of above-average sea temperatures to become classified as a fully-fledged El Nino condition.

The Cape Metro has just released this revised drought monitoring chart which clearly shows the “safe zone” extent to which stored water could be drawn down across the summer season. This too shows that under the worst circumstances the low point of storage of some 300 M.cuM could be reached at around May 2019. This would be a comfortable situation with adequate reserves. 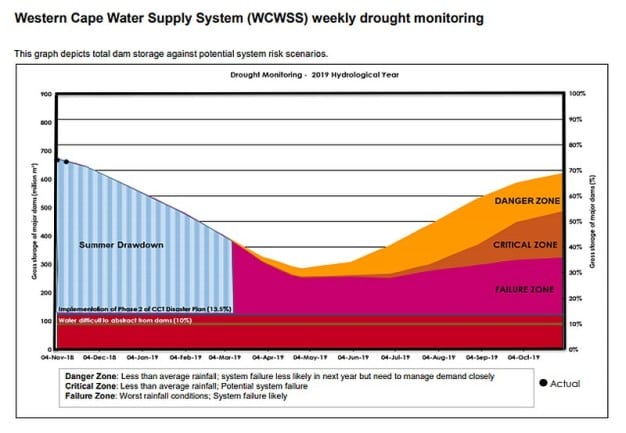 Against this background, a number of readers have expressed concern about the possible ill-effects should current restrictions be eased.

While this is a natural response after the stresses of the past few years, I feel that I must reiterate that we do have considerable stores of water and it needs to be used. An appropriate outcome is that water should be used steadily across summer so that by following winter there is space for fresh rainfall to recharge the dams back up to a good level (ideally 80% or better), as has often happened before. This will still leave a good reserve in case the following rains are less strong. The fall-back would be to reimpose restrictions if the following rains fail altogether.

Because if we do not use the water, then tariffs will be forced to remain too high and cause unnecessary hardship. Furthermore, good following rains would cause the then over-full dams to spill and that new water would flow to the sea and be completely wasted.

So we should use but certainly not abuse our water. However, maintaining maximum restrictions is not the correct answer. This past drought is likely to be the worst that will happen in our lifetimes. It would be irrational to impose an unnecessarily harsh lifestyle based on an exceptional event that is unlikely to recur.

Tom Brown.
Retired international businessman with a background in Finance and IT; and now a fruit farmer, with a passion for the weather and climate.
Views expressed in this article, and comments in response, are those of the writer and commenters alone and do not necessarily reflect the views and opinions of ShowMe, nor is any warranty hereby given as to suitability for any purpose of a reviewed enterprise or as to the quality of offered advice, products, services or value. Copyright ShowMe Paarl. All rights reserved. Copy only with prior permission.